We just like to rely on special assessments"… It’s not an uncommon response we hear after determining that a community has an insufficient allocation rate to their reserve account..

So what is wrong with reliance on special assessments?

Let’s dig a little deeper into each of the above…

Unfair to the Membership

Unfair, how is this so? The Board and much of the membership is ok with special assessments in your community how could this at all be unfair? Well it has to do with what the reserve account represents; most Boards and Membership we come across have the incorrect notion that the reserve account is just a savings account to pay for future expenses. What it actually represents is the depreciation to the common area assets over time, monetized in a bank account. It sounds more confusing than it really is…

As components deteriorate (depreciate) over time, an amount equal to the estimated depreciation should be set aside each given year into the reserve account; the membership that is utilizing that component in that particular year should be charged an amount equal to the depreciation of the component in that particular year. That way when the component is fully depreciated (no longer serves its function) there will be an amount in the reserve account that equals the amount to replace it. Inflation of the project cost over time and interest on the bank account balance will have significant impacts on the overal l final project cost and bank account balances over extended periods of time and are taken into account in a reserve study.

So how is a special assessment unfair?... Well homeowners who have joined a community after it was constructed but then charged a special assessment are actually paying for the past depreciation to the component; someone else’s responsivity or better stated lack of responsibility.

Let’s say a community has a failing roof which is 30 years old and going to cost $100,000 replace but they only have $20,000 in the reserve account. The community will need to special assess approximately $80,000 to the membership (or worse rely on a loan). Let’s say there are 20 units in this condominium building; the special assessment would be approximately $4,000 per unit. Ouch!.. 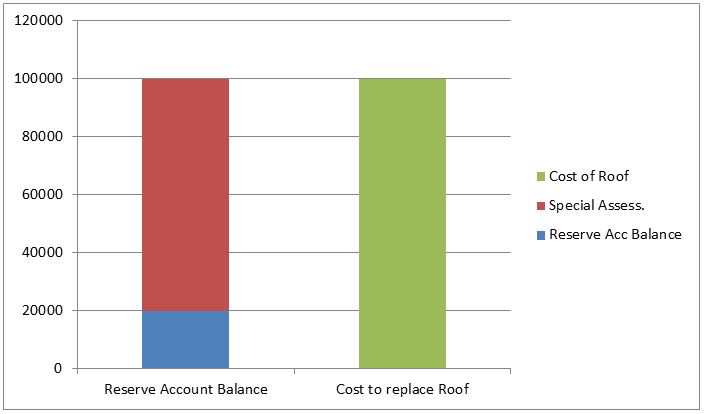 Now who is this special assessment fair to? - Only those unit owners who have stayed within the community for the past 30 years. All other members who have become unit owners after the roof was originally placed in service are being unfairly assessed. They are paying for the deterioration of the roof that past members should have been paying. On top of that they are expected to pay for their fair share of the roof deterioration for the next roof, essentially a double whammy on them.

So even if current membership request just to be special assessed for the costs at a later date what they are actually requesting is for a larger portion of the project cost to be placed unfairly on the future members in the community; they are asking for future membership to pay for more than they should be if we are taking into account fairness.

Cost to Membership is Higher when Relying on Special Assessments

This is also overlooked by many Boards planning their financial strategy. With reliance on special assessments come higher costs to the membership, especially over long periods of time. Over time inflation to cost of components and interest on the reserve bank account have significant impacts on the overall amount that is required to be collected and allocated to the reserve account in any given year. In the above example we have this $100,000 roof which has a useful life of 30 years. Well 30 years ago this same roof had a cost of approximately $42,000. The membership at that time would be required to set aside much less than the current membership… This is due to inflation which at a typical 3% will double the cost of goods ever 23-24 years. Lets see in the below chart how much is collected from these community members with the special assessment option of $80,000 versus adequate planning. We are going to assume a historical average of 3% inflation and an after tax interest rate of 1% on the reserve account balance. 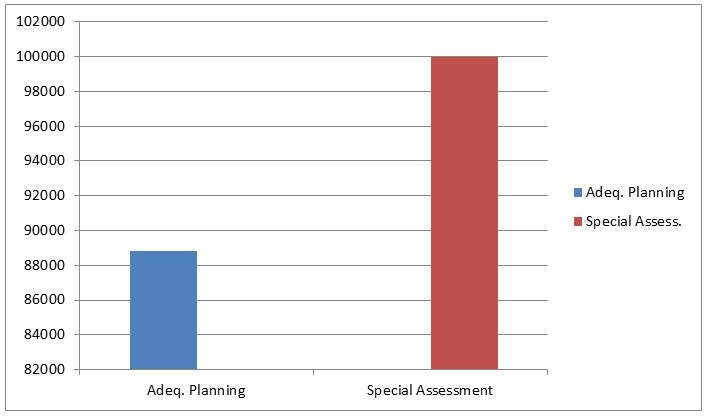 And all of this… could be avoided. It’s very tempting for a Board and membership to kick the can up the hill (I’ll get to this in a moment) for another day but it is the exact wrong thing to do when it’s the Boards responsibility to the community as a whole, this includes current and future members.

Kicking the Can Up the Hill

As can be seen in this graph using our prior example of the roof, this community, which relies on the special assessment option, kicked their can up the hill only to deal with a much larger problem – much higher costs! This is very common when there is a lack of funds in the reserve account and the project must be deferred until the funds can be collected, special assessment passed or loan secured. By deferring the project a community is simply budgeting for a more expensive project. It's cheaper and easier to collect the needed funds over time and have the reserve account balance necessary to complete the project when the time comes due.

When developing a financial strategy for a community we take into account fairness to the membership as well items that impact overall costs like interest rates on bank account balances and inflation to components costs.